HISTORY OF CALIFORNIA WATER: THE EVERYDAY USE OF WATER

A series of eight painting commissioned by the City and County of San Francisco, California in for the San Francisco Water Department in 1984 on the everyday use of water through history going back to the native people, and up to contemporary firefighters. Included in the eight paintings is a map of how the water is brought to San Francisco from the Hetch Hetchy Reservoir in Yosemite National Park, California.

New Hope Housing accepted the challenge from the city of Houston to purchase a rundown motel and turn it into housing for single residents who could look forward to living with dignity in a welcoming, and safe home.

Garza designed and cut 4 paper cutouts at one-sixth scale size. The paper cutouts were scanned and used as the matrix to cut ½ inch thick steel panels to make 4 murals each measuring 14 x 48 feet. These murals were installed on the front of each building facing the freeway, providing a welcoming for the residents, and an exhibition to passing motorists.

The City and County of San Francisco in 1999 commissioned artist Carmen Lomas to create a metal cutout to be installed in one of the gate rooms in the new San Francisco International Airport that would be visible to travelers from two levels, those departing on the upper level and those arriving in the lower level.

About BAILE: “When waiting passengers see the copper cutout BAILE it is as if they are looking in through a window of an artist’s studio. The artist is painting an image of Jarabe Tapatio dancers from Mexico. The copper cutout was based on a paper cutout that was photographed, digitized, and cut with a high-pressure jet stream of water.” 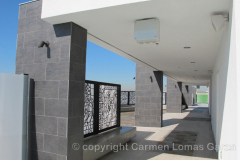 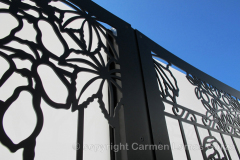 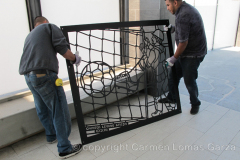 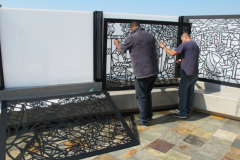 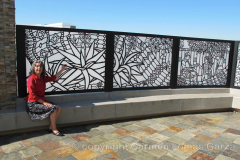 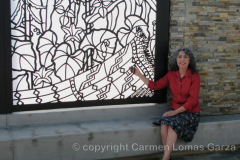 In 2010, AltaMed, a medical organization in Los Angeles, California commissioned Carmen Lomas Garza to create the designs for OFRENDAS (offerings), a sculptural fence for the roof top terrace of their new headquarters. The metal cutout fence is 72 feet long, 6 feet high, in 14 sections made of 3/16th of an inch thick steel that was laser cut and powder coated black. Behind each section is a sheet of frosted glass installed 3 inches back from the cutout. The frosted glass is backlit at night.

The Institute of Texan Cultures, a history museum at the University of Texas in San Antonio, Texas commissioned a painting in 2015 to add to its’ history of Mexican Americans in Texas.  For the painting A PLAZA IN TEXAS IN THE 1930s the curators at the museum requested that the image be of a generic plaza with scenery of what was usually seen in plazas in the 1930’s.

In 2015 the County of Alameda, Oakland, California commissioned a painting for a family waiting room in the new addition to Highland Hospital in Oakland. The curators asked that the image be about a joyful event with people of all ages, cultural backgrounds, and ethnicities in order to reflect what can be seen in Oakland’s communities. Also requested was the flora and fauna of Oakland home gardens.

The City and County of the San Francisco Recreation & Parks Department commissioned artist Carmen Lomas Garza in 2017 to create two site-specific artworks for the perimeter fence of IN CHAN KAAJAL Park (Yucatec Maya language meaning “My Little Town”). The California Condor and The Great Blue Heron are two cut steel panels that feature the birds with wings outstretched in actual size. The heron is depicted carrying a leafless branch, the building materials for its nest, and the California Condor with its wing span of 9 ½ feet flying high in the fog of San Francisco. The artworks speak to the natural habitat that surrounded Mission Creek, which once flowed near the park’s site.

The Smithsonian National Portrait Gallery in Washington, DC commissioned a portrait of Walter Alvarez in 2019. The curators requested a copper cutout portrait of a notable person, leaving the choice of the person up to Carmen Lomas Garza. She selected Dr. Walter Alvarez, a geologist, professor emeritus at U.C Berkeley, California who developed and researched his theory of the reason for the extinction of the dinosaurs all over the world 66 million years ago.